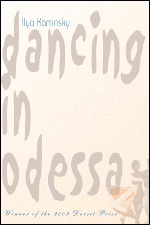 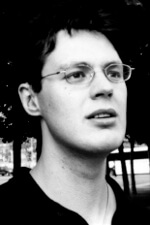 Book Review of Dancing In Odessa

Once in a rare while, if you are terribly lucky, you read a poet whose poems are so numinous, so breathtaking, hose rhythms are so full of music that you wish they could enter your body, could breathe with the lift and fall of your own breath — whose images, no matter how foreign to your own experience, enter your mind and are fixed there, changing forever your perception of the world. Ilya Kaminsky is such a poet and his first book, Dancing in Odessa, bursts with such poems.

Kaminsky, deaf since he was four, was born in Odessa, in the former Soviet Union in 1977. He emigrated to the United States in 1993. That he is still very young, writing in a language that is not his soul language, a language whose rhythms he cannot hear, makes this work all the more wondrous.

And how does he construct this magic? Dancing in Odessa is composed of five sections of free verse and prose poems: memories of the poet’s youth in Russia; a long elegiac sequence to the poet Osip Mandelstam who died in a Russian prison; love poems to a woman he names “Natalia”; a sequence of poems to his “masters”…those forebears that serve as his mentors; and a final long sequence aptly entitled: “Praise”.

But a simple description of the book’s tight cohesive structure hardly does justice to the poems themselves. Here are fragments of memory: the Odessa of his youth… laundry in the windows, street musicians, doves and crows, the mother, the father, dancing as “the darkness speaks behind them”, the aunt, in a soldier’s uniform, in wooden shoes, the grandfather “running after a train with tomatoes in his coat”. And here, too, is the love who “dances without a shirt, covering what she could,” whom he “kisses / on the floor, among the peels of lemon;” for whose sake he can exclaim: “how magical it is to live!” (and we, reading this, nod, knowing it to be true!).

And here, also, is homage to Osip, the martyred poet who “puts his fingers in the fire,” to Celan, to Brodsky, to Tsvetaeva, to Babel, a farewell to them each — and gratitude for their legacy: “I write,” (he says of them) “as the pages turn/ to the shuffle of your steps across the room.”

And here are poems of metaphors so original, so sensuous and accurate that they seem to leap off the page: “memory” is “an old flautist,/ (who) plays in the rain…;” “time” is the “twin” who takes him “by the hand through the streets of (its) city;” the “past” is “figures coming to the water’s edge, carrying lamps;” love itself is: a one-legged bird bought for forty cents as a child… and released.

These are poems of dancing in spite of the darkness behind us; of bright fruit, oranges, apples, lemons, tomatoes, nurturing the spirit. In these poems, “to live” is the sacrament, the most important thing, the need above all needs. “Lord” he cries out, “Give us what you have already given.”

I have nothing but praise for Dancing in Odessa. This book touches what is most deep in me — the urgency of these words, their forward rolling, makes me want to go write my own, no, more than that — makes me want to change the way I live. There are poems here, many of them, that are almost unbearable in their beauty, places in the book where I can’t bear to read longer because I want to stall in the moment the words have given me, to put down the book, to rest in the strength of the words. Words such as these:

This is how we live on earth, a flock of sparrows.
The darkness, a magician, finds quarters

behind our ears. We don’t know what life is,
who makes it, the reality is thick

with longing. We put it up to our lips
and drink.

When you pick up this book, you will read straight through, then read it again. You will keep it on your night-table for those moments when you need something to cherish, something to hold on to, words that face the darkness, unflinching, that give you solace in this troubling world.