Mary and the Giant Mechanism

“…Through her thousand fresh images and tender elisions we are asked to look and finally see. To read Mary & the Giant Mechanism is to revisit our common history with an open, lyric heart.”— Carol Ann Davis

“Early in Mary & the Giant Mechanism, the poet-speaker acknowledges, ‘my whole life there’s been war in warmer places.’ Comprised almost entirely of two long sequences, Mary Molinary’s brilliant first book is, among other things, a meditation on the American wars in Iraq and Afghanistan. ‘Form carries its own disclosure’ Molinary asserts, prompting us to consider her own formal choices: syntax marked by fragmentation and elision, often rendering thought incomplete or indeterminate and putting pressure on her startling images (drawn from disciplines as diverse as particle physics, painting, anthropology, and ornithology) to accrete meaning… The poet-speaker struggles with the book’s overriding concern: whether or not it is possible to be aware of ongoing terror—how, if ‘we cannot or dare not see the truest things,’ do we ever truly ‘see’? Given the paradoxical nature of the problem, these poems cannot fully answer their own questions. Nonetheless, Molinary suggests that something other than violence tethers individuals across vast geo-political positions to each other—the desire to ‘prepare the cell we have in common,’ to ‘sing your secret bird to sleep.’”
—Shara McCallum

“To stop time is one of the most powerful aspects of literary art, especially lyrical poetry in its ‘silence and slow time.’ In the long sequence ‘The book of 8:38,’ Mary Molinary brings us repeatedly to an examination of a particular moment of the day, ‘Each minute a form / Each one / leading another on.’ Is time actually linear as it goes round and round? The second hand ‘stammers,’ as each second the clock (‘chunk’) punches itself in the face. The immediacy of time, its fleeting ‘now’ as lyric, meets with an epic simultaneity of experience. Yet knowledge of time is also awareness of your role in time: ‘But 8:38 gathers up // the water of me & holds / me captive in a small bowl // Measures me out all night / Makes the stone of me watch.’ I admire this absorbing, witty, and often beautiful work.”
— Paul Hoover

“Riven by the events of the first decade of this century and shot through with grief and a bird-like wonder, Mary Molinary uses the space of the poetry collection to experiment with a form—and therefore invent a mechanism—to reckon with this ‘marked little bird of a heart’ that must live each day with the knowledge of the ongoing torture, war, and violence performed in one’s name. Perhaps in imitation of a complicity alternately figurative and real, the poet situates commonplaces hard by the nearly indescribable: a borrowed ornithology joined to an ancient illumination, ‘a speaking self’ beside ‘a seen other,’ elegy followed by apology followed by ‘what will emerge.’ Through her thousand fresh images and tender elisions we are asked to look and finally see. To read Mary & the Giant Mechanism is to revisit our common history with an open, lyric heart.”
— Carol Ann Davis, judge’s citation for the Tupelo Press First Book Award 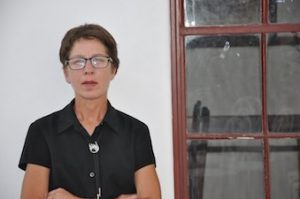 Born and early-reared in Virginia, Mary Molinary moved in 1968 with her family to Memphis, Tennessee. She has had many jobs, including college administrator; editor and seller of classified ads at alternative newsweeklies; greenhouse and nursery worker; housesitter; legal assistant; reader for the blind; physical therapy assistant — and through it all, bartender and waitress. She earned a B.A. in Cultural and Linguistic Anthropology from the University of Arizona and an M.F.A. from the University of Memphis. She currently lives in Tucson, Arizona.

How we inhabit this same space secretly
thrills me. Like Einstein. Time’s
little algorithms of glint & possibility. No doubt
8:38 exists & you sit now on its sturdy lap.
Oh it has a skinny shadow. Oh
it is nitrogen fleeing the scene of a crime.
8:38 holds in its hands the synchronicity
of our correspondence. Alchemies of coffee
steam rising from our cups. What I see
in the gesture of your hands as they wave in the night.
What the birds only think they understand.

A migratory angel of autumn
folded into the much
misunderstood
genome of its organza
wings & perched
atop the dusty corner cupboard:Tell me your last thoughts
it said.Said I
Tell me your first.That’s easy
said the angel
I’m flying.