by CMarie Fuhrman and Dean Rader

In this groundbreaking anthology of Indigenous poetry and prose, Native poems, stories, and essays are informed with a knowledge of both what has been lost and what is being restored. It presents a diverse collection of stories told by Indigenous writers about themselves, their histories, and their present. It is a celebration of culture and the possibilities of language, in conversation with those poets and storytellers who have paved the way. A truly synergetic collection of contemporary and early Native voices.

“The Native nations held within the pages of Native Voices: Indigenous American Poetry, Craft and Conversation share their minds and leave a trail of their spiritual journey…”-Erik Bitsui, Waxwing

“In this groundbreaking anthology of Indigenous poetry and prose, Native poems, stories, and essays are informed with a knowledge of both what has been lost and what is being restored…”-Midwest Book Review

“The depth of my thinking and the toolkit of craft was so rich after reading these offerings…”-Kristina Marie Darling, Kenyon Review

“Native Voices: Indigenous American Poetry, Craft and Conversations should be on your shelf, your reading list, or your syllabus — or even all three.”-P. Joshua Laskey, The Literary Review

“NATIVE VOICES invites us to immerse ourselves in the poems and essays of forty-four contemporary indigenous poets. Essays regarding writers who have influenced them add both background and gravitas.” —Mary Ellen Talley in Crab Creek Review

“I write from a continuous space of erasure. Poetry was the one way that I was able to hold onto…my history, geography, and language.” — Craig Santos Perez, contributor

In this groundbreaking anthology of Indigenous poetry and prose, Native poems, stories, and essays are informed with a knowledge of both what has been lost and what is being restored. It offers a diverse collection of stories told by Indigenous writers about themselves, their histories, and their present. It is a celebration of culture and the possibilities of language.

And, a selection of resonant work chosen from previous generations of Native artists.

“There really is no better anthology out there that collects indigenous poets publishing from 1960 to the present.” — Dean Rader, co-editor

CMarie Fuhrman is the 2019 recipient of the Grace Paley Fellowship at Under the Volcano in Tepotzlán, Mexico, and winner of the Bank’s Award for poetry. A 2019 graduate of the University of Idaho’s MFA program, she is the Project Coordinator for Indigenous Knowledge for Effective Education Program (IKEEP). Often anthologized, CMarie’s poetry and nonfiction have appeared in Yellow Medicine Review, Cutthroat a Journal of the Arts, Whitefish Review, Broadsided Press’s NoDAPL compilation, High Desert Journal, Sustainable Play, Taos Journal of Poetry and Art, among many other venues. She currently serves as Poetry Review Editor for Transmotion Journal. CMarie resides in West Central Idaho.

Dean Rader publishes widely in the fields of poetry, visual culture, and Indigenous Studies. His scholarly books include Engaged Resistance: Contemporary American Indian Art, Literature, and Film from Alcatraz to the NMAI (University of Texas Press, 2011), which won the Beatrice Medicine Award for Excellence in American Indian Scholarship and Speak to Me Words: Essays on Contemporary American Indian Poetry (University of Arizona Press, 2001, edited with Janice Gould). He also curated a special issue of Sentence devoted to contemporary Indigenous prose poetry. Rader’s most recent collection of poems is Self-Portrait as Wikipedia Entry (Copper Canyon), a finalist for both the Northern California Book Award and the Oklahoma Book Award. He also co-edited Bullets Into Bells: Poets and Citizens Respond to Gun Violence (Beacon Press). He is a professor at the University of San Francisco and was awarded a 2019 Guggenheim Fellowship in Poetry.

A Story of How a Wall Stands
by Simon J. Ortiz

At Aacqu, there is a wall almost 400 years old
which supports hundreds of tons of dirt and bones—
it’s a graveyard built on a steep incline—and
it looks like it’s about to fall down the incline
but will not for a long time.

My father, who works with stone,
says, “Tat’s just the part you see,
the stones which seem to be
just packed in on the outside,”
and with his hands puts the stone and mud
in place. “Underneath what looks like loose stone,
there is stone woven together.”
He ties one hand over the other,
fitting like the bones of his hands
and fingers. “That’s what is
holding it together.”

“It is built that carefully,”
he says, “the mud mixed
to a certain texture,” patiently
“with the fingers,” worked
in the palm of his hand. “So that
placed between the stones, they hold
together for a long, long time.”

He tells me those things,
the story of them worked
with his fingers, in the palm
of his hands, working the stone
and the mud until they become
the wall that stands a long, long time.

You can download the free lesson plan for Native Voices here. 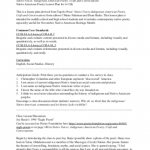