“Karen An-hwei Lee’s third book is a beautiful and sustained meditation on the impermanence of humanity’s essential components: memory, spirituality, emotion, thought….Contemplative and linguistically sophisticated,Phyla of Joy is simply exquisite —‘ink and stanza / flow like wind on grass.’”— Rigoberto González

“Karen An-Hwei Lee’s Phyla of Joy, is a marvel of light, blossoming flowers, and discovery. Its cover showcases a blooming flower. Inside, the poems bloom as well” — Whittney Jones, New Madrid

“The poems are exceedingly visual, and much of the music in the poems corresponds to the tightly concrete—yet also seductively puzzling—images. Many of the poems are contemplative in tone, but they develop their meaning (if meaning is what they’re aiming for) through juxtaposition of imagery rather than explanation. I found myself rereading several of the poems, sometimes because I found the language so attractive, sometimes because I didn’t quite understand; most often, I experienced both responses simultaneously. I realized, eventually, that these are poems to sit with, to absorb, to pick up and put down and pick up again.”— Lynn Domina

“Reading Phyla of Joy is akin to listening to the reverberations of a singing bowl: first, one is attracted to the struck note, but the diminishing vibrations last a long time, compelling a continuing reflection.”— Ann E. Michael, Poets’ Quarterly

“Karen An-hwei Lee’s third collection, Phyla of Joy, shines with poems of refined craft and subtle linguistic play. Love of language, love of the divine and reverence for the embodied human feminine each together and in turn animate the delicate interior and closely magnified exterior landscapes of these poems.”  — Janelle Elyse Kihlstrom, Melusine

“Instead of distancing the Divine from cigarettes and kitchen fires, Lee welcomes the one into the other. But the startling result isn’t a third world tangled with dichotomies. The result is Phyla of Joy, a portrait of the world we live in, but reclaimed through gracious eyes that somehow inject light into everything from famine to girls born with cleft palates.”— Eugenia Leigh, The Lantern Review blog

“In Phyla of Joy, poetry is a form of spirituality. It is easy to recognize Biblical allusion in Lee’s titles—many are “Psalms” or “Songs,” “Prayers” or “Invocation.” In “Preservation of Rare Languages,” Lee writes: “As we pray, languages/ are zephyrs, eddies of air” and “Women/ speak rare languages to children/ keeping tongues alive.” Language is legacy, and it is a privilege that comes along with being a woman that we can pass along language to our children. In this way, language is a way of building community, of forging and continuing relationships, of bridging.” —Angela Veronica Wong, Iowa Review

“Lee’s subject in this book is lyricism, rapture, canticles in all their shapes and flavors… These are passionate, visionary poems. Beautiful.” — Vince Gotera, North American Review

“Karen An-hwei Lee’s third book is a beautiful and sustained meditation on the impermanence of humanity’s essential components: memory, spirituality, emotion, thought….Contemplative and linguistically sophisticated,Phyla of Joy is simply exquisite —‘ink and stanza / flow like wind on grass.’” — Rigoberto González

There’s an undeniable audacity in a poet using the word “joy” in our beleaguered world. In her new book, Karen An-hwei Lee combines scientific precision and an appetite for far-flung vocabularies with a fascination for the sources of rapturous emotion.

In poems that roam from the intimacy of prayer to the art of brewing tea, from bamboo-related famine to quasars, the globe’s minor seas, and the nuptial flight of ants, Phyla of Joy reaches toward ecstasy.

Tupelo Press is pleased to provide the Phyla of Joy  Reader’s Companion in free, downloadable PDF format. Click on the link to download. (1.9 M) 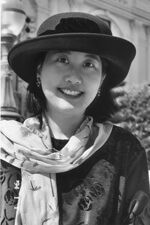 Karen An-hwei Lee is the author of Ardor (Tupelo Press, 2008) and In Medias Res (Sarabande Books, 2004), selected for the Kathryn A. Morton Prize by Heather McHugh and chosen for the Norma Farber First Book Award by Cole Swensen. A former writing resident at the MacDowell Colony of the Arts and the Millay Arts Colony and recipient of a National Endowment of the Arts grant, she currently chairs the English Department at a faith-based college in southern California, where she is also a novice harpist.

Prayer for the Underground Supplicant

or the moon’s cracked birch bark
frail as a dollar on a blind woman’s face, pale hydrangea

shredded and falling in rare archives, a paper subway
in a supplicant’s underground darkness, swaying,

and a melanin-rich flower in this fluorescent tube
translocating water to and from unassailable air.

This is your graduated body, no ordinary engine in the night. 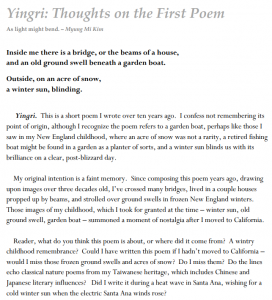