Third Voice asserts lyric beyond personal expression and drama beyond the stage, using the spectacle of minstrelsy as a deformation of mastery in an audaciously conceptual yet visceral performance.

“Kocher (Ending in Planes) takes a cue from T.S. Eliot’s essay “The Three Voices of Poetry” as she utilizes the third voice—of a dramatic character—to thread history and the present. Sinking into the uncomfortable truths of her characters, Kocher uses these voices—including those of Richard Pryor, Paul Robeson, Pearl Bailey, and Eartha Kitt—as a means of challenging racism and exposing its changing reflection, whether it manifests as a grotesque caricature or a psychic wounding. Kocher mixes instructions on the running of a minstrel show with short skits featuring fictional women with names such as Lacy N. Igga and historical figures such as Malcolm X. In “[No Saints] One Act,” the poetic “I” is replaced with the poetic “You,” with the self becoming another character: “If you spoke to the voice in your head you could finally understand but would discover a different language.” There’s a lot to process in this collection, but the language is rich, deep, lyrical, and engaging enough to support the reader through the complexity of the presentation. The dramatic voices that operate throughout act as a reminder that history is a fragmented reality with many angles, not simply a linear series of indisputable facts.” —Publishers Weekly

Praising the power of lyric drama, T. S. Eliot described the use of third voice as a means for characters to address and interrogate one another, and second voice as a way for characters to talk to the audience. In this daring new book, the principal narrator presents as a caricature reflecting the tangible experiences of a disembodied “I” posed against absurd selfhood—a voice imbued by sublime otherness. Within a dismantled minstrel show, Ruth Ellen Kocher frames a female voice splintered and re-figured as “self” and “character.” The incomprehensible nature of the sublime emerges through a cast of other personages including Eartha Kitt, Geordi LaForge, Immanuel Kant, W. E. B. Du Bois, and Malcolm X. Third Voice asserts lyric beyond personal expression and drama beyond the stage, using the spectacle of minstrelsy as a deformation of mastery in an audaciously conceptual yet visceral performance.

Praise for her previous book:

“domina Un/blued is at once deeply moving and wildly intelligent… a wonderful book—sophisticated, beautiful, and innovative”
— Lynn Emanuel

“Kocher layers culture on culture—the American quotidian on top of modern-day Italian on top of the remnants of Roman civilization—a palimpsestic technique that highlights how supposedly extinct contours and patterns bleed through to the present day. The primary subject of this collection is a monstrous one—slavery—and Kocher approaches it backwards, holding a mirror. This oblique approach allows us to triangulate our way to truths that remain unavailable to the standard histories, the way the heritage of slavery continues to shape our society. Kocher’s formal innovations reflect unexpected angles on her subject, and surprise us everywhere…”
—from the PEN Open Book Award Judges’ Citation 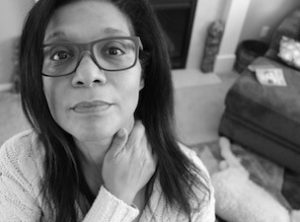 Ruth Ellen Kocher is the author of six previous books, including domina Un/blued (Tupelo Press, 2013), co-winner of the 2014 PEN Open Book Award. Her poems have appeared in various anthologies and journals and she has been awarded fellowships from the Cave Canem Foundation, the Bucknell Seminar for Younger Poets, and Yaddo. She is Associate Chair and Director of the Creative Writing Program at the University of Colorado where she teaches Poetry, Poetics, and Literature, and is a Contributing Editor at Poets & Writers Magazine.

SKIT: Pearl Bailey and Eartha Kit Revise Observations on the Feeling of the Beautiful